It all started with the city. I live in Sofia, Bulgaria — a typical Eastern European city. In terms of bike riding, Sofia’s most typical aspects are the clumsy road repairs, the diverse terrain and the very small number of high quality bicycle lanes. As a matter of fact, the recent trend has been for park alleys to be better maintained than actual roads in Sofia.

The city provided my route — sidewalks, curbs, asphalt, all kinds and sizes of pavements, tram lines, forest trails, and of course unexpected potholes created by repair works here and there. Being a relatively sturdy guy (about 120 kg back then, now about 105 kg), I decided that my city bike could not be some delicate and fragile 5 kg contraption. My bike had to be a heavy duty beast. That is why I chose a mountain bike with no rear suspension. In early 2018 I bought myself a NS Bikes Djambo 2.

At first it felt like a dream come true… until I figured a few things out: the fork was shit, and the standard mountain bike tyres made me slow and cumbersome (wasting too much effort). I thought that after a while I could just replace any parts that annoyed me. I ended up replacing the tyres and the fork. I caught an incredible discount at a German website where I got myself a Fox Racing Shox 34 Float 29″ 130 Grip Rhythm 51 Boost Suspension Fork – 2017 OEM (the whole thing so far is just the name of the fork!!!) for just $300, as well as 2x Schwalbe Super Moto-X Performance RaceGuard 27.5+х2.80 tyres for about $30 each. The new parts made the bike both lighter (the new fork weighed about 1 kg less) and considerably nimbler and faster… but now I would mostly use the fast gears and rarely touch the slower ones. All of a sudden the chainring had become too small for me. I replaced it with the maximum size available (38T, zero offset), which barely fit on the frame BTW, but it was still not enough for me — I felt that I was not using my full potential. I wanted to be faster but even with maximum pedalling I could only reach 35 km/h on a flat terrain. Still, I was faster than the initial setup. I now encountered another issue — being faster made sharp stopping trickier. The standard brakes for the model (SRAM Level) were obviously not designed for my ‘delicate’ build, so they would make these squealing sounds whenever I wanted to stop. I was told that this was typical for the model, the squealing. I replaced them, of course — with Shimano Zee with Shimano Deore XT SM-RT76 rotors (203 mm on the front wheel and 180 mm on the rear one). Now everything was just right — the new brake system was both highly effective and quiet. 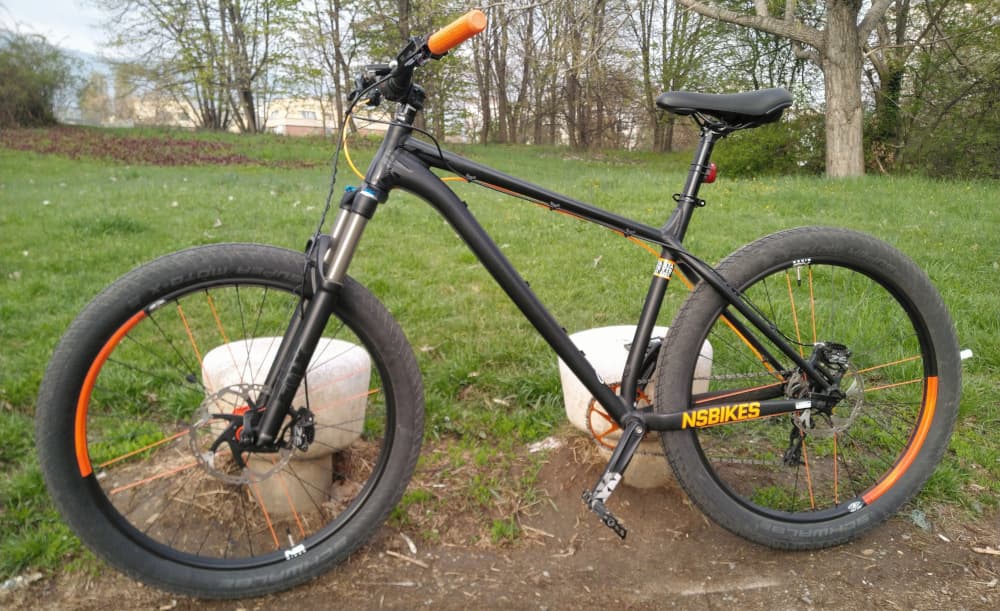 I was still annoyed by the fact that I was slow but I was a total OG, riding a bike from NS Bikes… until it dawned on me — the frame was the bottleneck!

I really opened a can of worms there… which frame had a similar geometry but would also fit a large chainring and my fabulous tyres? I came up with a rather complex solution based on Dartmore’s L-sized frame Primal 29. I had to replace the rear hub, from 135 mm to 148 mm. Furthermore, I ordered an Absoluteblack chainring (that’s an additional $117). I also ended up replacing the rims with a narrower model in order to get the tyres to fit. It was a total enema to get it done and I had to add two extra washers to the bottom bracket — it was too small for my purposes. Furthermore, the tyres would pass just a hair’s distance from the chainstays. Clearly the L-size of the NS Bikes and Dartmore brands are not meant for people of the same height. 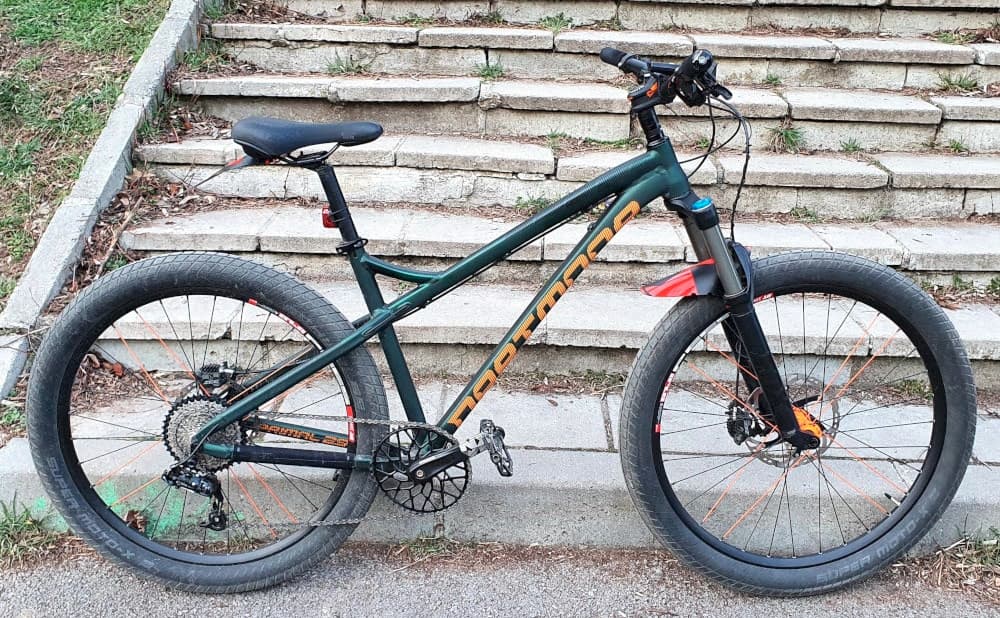 That’s where my designer adventure began — I made up my mind to design my own frame! I was quite happy with the dimensions of the NS Bikes frame… if only it would fit a large chainring at the front and a larger hub at the back (because that frame was equipped with a QR 135). I found a user friendly frame design software — BikeCad! You just enter the dimensions you want, and it generates a pretty good engineering drawing. The free version was missing many of the specifications that I needed, so I made an agreement with the developer to translate the software into Bulgarian, and in return I would get full access to the professional version. I saved about $500 by doing translation work for two months or so. This started a whole new process of design experiments and searching for the right manufacturer.